Higher than average temperatures along with significant lack of moisture broke records in 2017 for Phoenix, Arizona.  In fact, there were 14 high-temperature records set in 2017 including a high of 119 degrees set on June 20, making it one of the hottest days of all time for the region, and November being the warmest November to date in Phoenix history.  Not only did we see record high temperatures in 2017, but Phoenicians also experienced significantly less rain than normal resulting in an increased chance of a harsh fire season and potentially a tree infestation with bark beetles.  Drought weakens trees, allowing for bark beetles to flourish and attack in high numbers.

So, what does this mean for our landscape?  EVERYTHING!

The high temperatures have forced communities around the valley to increase their water usage to keep the plants and turf from damage or even fatality.  Community water budgets more than likely surpassed the original budgeted amount due to the forced increase of water usage needed.  And according to the Climate Prediction Center’s seasonal outlook, it is predicted that 2018 could follow the same weather pattern.

The strong heat has also created a false sense of “spring” and has promoted the Bermuda grass to come out of dormancy.  This change in weather has created a “salt and pepper” look to the turf on some properties, misleading it to look as if there are irrigation issues or other problems with the landscape maintenance.  Another cause for the “salt and pepper” look could be from the Poa Annua turf weed (aka Bluegrass) that is coming up fast.  While the weed is taking hold to the turf, its seeds take on a brownish color which could be mistaken for early sprouting Bermuda. 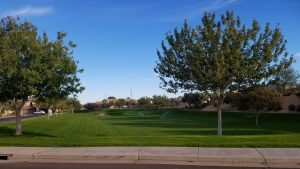 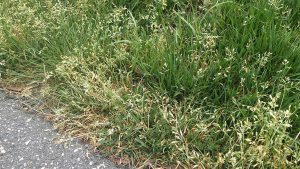 With so many different potential outcomes from the recent Arizona climate changes, it opens the door for even some of the most well-maintained properties appear unhealthy.  Open dialogue with your professional landscape management company, could assist with understanding the condition of the property’s landscape assets and offer recommendations to prepare your community for another warm and dry year.